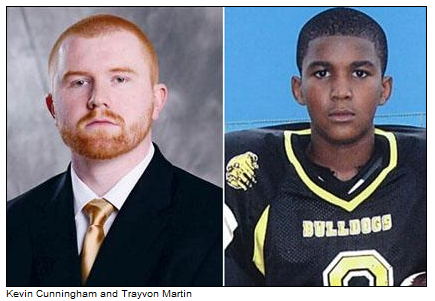 Trayvon Martin  recently  killed a month ago in Sanford, Florida is the international story of a black American 17-year old  youth gunned down and currently assumed and legally presumed guilty of unleashing  a deadly assault on a  hired private property security guard where he was staying while — armed with Skittles candies and a large can of Arizona Ice Tea. The now globally promoted incident  by traditional and social media is receiving an historic groundswell of grassroots response  nationwide. The lone gunman, Mark Zimmerman is said by authorities to be using rights reserved in the  State of Florida called a “stand your ground” defense. This averted his arrest and investigation and is considered a ‘racist tactic’ causing tens of thousands in Florida and across the nation to commit themselves to peaceful demonstrations, political rallies, silent vigils and other direct-social-action planning initiatives for 2012  perhaps not often seen in our nation since the historic civil rights era. It was the direct-response of rank and file citizenry like this to social injustice that fueled the historic civil rights movement in America thirty plus years ago and set the stage for new national and international change-based leaders encouraging improvements in modern democracies and other forms of government.

Our national social media grapevine communicated by the “trailblazing Duke alumni” Nate White, a non-profit development consultant and fundraiser this week carries great and fruitful information for Groovetrak readers to fashion new  ideas and imagination to. This time Mr. White and company brings us  an unfolding an uniquely American tale of a real ‘super Irishman’ nurtured as at Howard University Law School who is currently marshaling the involvement of www.change.org and 2 million others in a democratic  signature campaign to petition justice in the Trayvon Martin killing.

After reviewing the information just think about how many thousands of non-black graduates there have been to benefit from educations at historically black colleges and universities. This type of “constituent voice” could proliferate and certainly make a difference in social engineering and perhaps for new appetites to clarify efficacy and justice in our third century. Futurist in education and government like Gary Marx suggests that the Millennial Generation will certainly grapple with what they consider injustice in the very near future. The Nate White et tal grapevine is substantiated by Kerry O’Shea in an article published in Irish Central an affiliate publication of the renowned Irish Voice newspaper.

When Kevin Cunningham, who describes himself as “Super Irish,” heard the news about the shooting of 17 year old unarmed Trayvon Martin in Florida, he knew he had to do something to help. Cunningham looked to social media as a platform for helping the effort to see George Zimmerman, Trayvon Martin’s assailant, be prosecuted.

MSNBC’s Miranda Leitsinger spoke with Cunningham and learned how the lawyer’s small effort garnered huge results. Using Change.org to create a petition which demands Zimmerman be prosecuted for the shooting of Martin, Cunningham utilized social media to helped the petition go viral and ultimately receive more than 2 million signatures.

Morale of the American Connections:

As grapevines go…they answer questions in breadcrumbs: we already know (according to King Papers) that Dr. Martin Luther King’s dad’s lineage  was notably Irish and Dr. Henry Louis Gates himself-traced the Irish and the Yoruba to complete a connection; and even “I” was nurtured in the black community and a world-renowned City and sent to two Jesuit universities to improve a tenacious fight for people in need. So… Only in America will [we the people] prevail to find the Ultimate constituent peace and creative solution to the circumstance of-the-human-condition 2012 causing empowered-people to create evolving civic standards beyond class and partisan tolerance — as our second-to-second progress is watched tirelessly by a global that we try to reform. :>)