New York born, Jerry Hunt is the co-owner of a family run transcontinental travel business whose U.S office is based in New York called Asante Safaris, Inc. Jerry is a former pilot, owner and operator of a general aviation company that he ran in East Africa from 1976 to 1998.

A friend for almost 20-years of Groovetrak.Net publisher, W. Calvin Anderson. Calvin, says, “the thing about Jerry — is that he loves to engage with “world-travelers” and those interested in becoming 21st century cultural, business, wildlife and botany explorers.
This year he will escort travelers on a special journey to both Tanzania and Ethiopia. Tanzania is where he met his beloved wife, Renny and raised their children. Renny is also the co-owner of Asante Safaris.

On this 13-day journey (airfare included)
• Tour the Swahili Coast: Tanzania’s Eastern Coastline and surrounding islands of Zanzibar, all of which played a major role in the Indian Ocean slave trade.
• Visit Olupai Gorge, an important site that tells the story of human existence and evolution
• See wildlife in the Ngorongoro Crater, a sunken volcano that is home to more than 25,000 mammals
• Have lunch in the mountain town of Usangi, where his wife was born and raised
• Tour the heart of an old German colonial settlement
• Visit the first churches built within Rock in Ethiopia
• Tour and learn about historical sites for the Queen of Sheba and Haile Saliese

Anderson adds that, “What’s unique is that Jerry introduces not only historic places and people of biblical and academic significance — he also introduces opportunities based on old friendships, family ties with a diplomatic understanding of how protocols and business opportunities work in the countries that he introduces his travelers to. So if you are interested in business and world renowned exploration and discovery join Asante Safaris to See “Garden of Eden” in Tanzania and Ethiopia too!. November 2 to November 15, 2013” 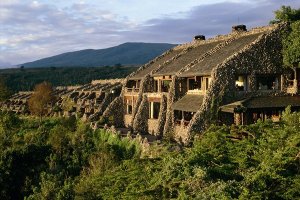