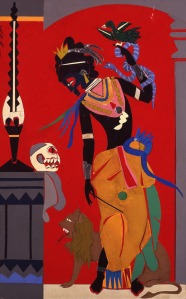 If you are a student or someone who has an interest in creating work in the fine arts: sculpture, painting etc. this article is written especially for you. The article is about how important it is to choose subjects that work for you and the audience that you want to reach through your art. I have chosen one of the artistic series by the late, Romare Bearden as my example of artwork with long-term active appeal. The advice will speak for itself!

The Smithsonian Institute curators say, “Romare Bearden (1911-1988), one of the most powerful and original artists of the 20th century, created a series of collages and watercolors based on Homer’s epic poem, The Odyssey. Rich in symbolism and allegorical content, Bearden’s Odyssey series created an artistic bridge between classical mythology and African American culture.”
According to the Romare Bearden Foundation, “Romare Howard Bearden was born on September 2, 1911, to (Richard) Howard and Bessye Bearden in Charlotte, North Carolina, and died in New York City on March 12, 1988, at the age of 76. His life and art are marked by exceptional talent, encompassing a broad range of intellectual and scholarly interests, including music, performing arts, history, literature and world art. Bearden was also a celebrated humanist, as demonstrated by his lifelong support of young, emerging artists.”

Subjects for Art are Very Important for Prolonged Audience Engagements
Example: Bearden’s A Black Odyssey
This exhibition of 49 original collages, watercolors, and drawings is a visionary retelling of Homer’s story of Odysseus. With characteristic audacity, Bearden cast all the characters in this ancient Greek saga—whether gods or mortals, villains or heroes—as Black. The artist’s unique images draw upon many visual traditions, ranging from bold, stylized forms adapted from the French painter Henri Matisse to the visceral, sculptural forms of West African masks. Throughout the series Bearden explores the universal themes of journeying home, reuniting with loved ones, overcoming obstacles, and the quest for knowledge.

Wikipedia Research Reference for Homer’s Odyssey
According to Wikipedia our free open source encyclopedia, this is a poem by Homer which,” mainly centers on the Greek hero Odysseus (known as Ulysses in Roman myths) and his journey home after the fall of Troy. It takes Odysseus ten years to reach Ithaca after the ten-year Trojan War.[2] In his absence, it is assumed he has died, and his wife Penelope and son Telemachus must deal with a group of unruly suitors, the Mnesteres (Greek: Μνηστῆρες) or Proci, who compete for Penelope’s hand in marriage.” The poem is past of classic literature in the English Language Arts which has been read by many generations and is still read by high school students all over the country. The Odyssey is an epic poem that comes from Greek oral tradition.

Romare Bearden’s work has been exhibited in Harlem and at the New York Metropolitan Museum of Art and toured by the Smithsonian Institute in Washington, DC and shown all over the nation and the world.
He was certainly a forward thinking artist. It is very important what an artist choses as his or her subject. The subject and the quality of the work(s) determine the interest and the lasting market-value and attention given by the public.

About the Romare Bearden Foundation
The Foundation was established in 1990 as a nonprofit organization by the artist’s estate to preserve and perpetuate the legacy of Romare Bearden (1911-1988), an American artist of African-American heritage, who is widely acknowledged as one of the most talented and original visual artists of the twentieth century. From 1990 until her death in 1996, Nanette Rohan Bearden, the artist’s wife and a noted dancer and choreographer, was president of the Foundation.
For over a decade, the Foundation has honored Bearden’s memory and preserved and perpetuated his artistic legacy by supporting educational programs, special projects, exhibitions, critical scholarship and seminal publications that deepen appreciation of and access to Bearden’s extraordinary art and life. In addition, the Foundation acknowledges the professional and personal encouragement Bearden generously provided other artists, as well as his broad intellectual and scholarly interests, by supporting the creative and intellectual development of up-and-coming African-American artists and scholars.

For More Information About The Romare Bearden Foundation
http://www.beardenfoundation.org/about.shtml