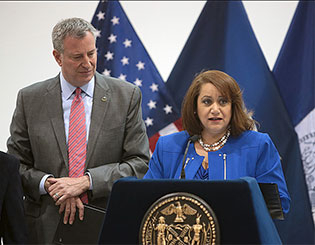 Photo courtesy of the Mayor’s Office.

April 18, 2014 – Mayor de Blasio today appointed Cynthia López as commissioner of the Mayor’s Office of Media and Entertainment. A native New Yorker, López brings more than two decades of experience in New York City’s film and television industries and a commitment to nurturing talented, up-and-coming filmmakers and forging partnerships with top national media companies. As commissioner, López will build upon the city’s legacy as a film and television hub, with a focus on investing in new projects to diversify and build a more inclusive entertainment industry, and expand educational and training opportunities for the film and television industries.

López currently serves as executive vice president and co-executive producer of American Documentary and the critically acclaimed documentary series, POV, where she is responsible for all aspects of the organization’s development, including programming, community engagement communications, marketing and digital strategies. Over the course of her career, López has made it a priority to promote the work of filmmakers from traditionally underrepresented groups, and mentor first-time filmmakers.