We certainly buy cars. There are also too many experienced union and retired union workers with “know-how” to allow this type of quality manufacturing slide to continue.

Made in America… must return to standard like those with the “Real McCoy” stamp of approval(http://blackinkmagazine.com/the-real-mccoy/).

We need a “knowledge culture” and less of a “swag” culture.             We need more Science, Technology, Engineering, Mathematics (STEM) and Economic for as I like to say “STEEM” training.  That time in our history related to Elijah McCoy inventions that our kids today learn about from the Common Core Curriculum in Third Grade. 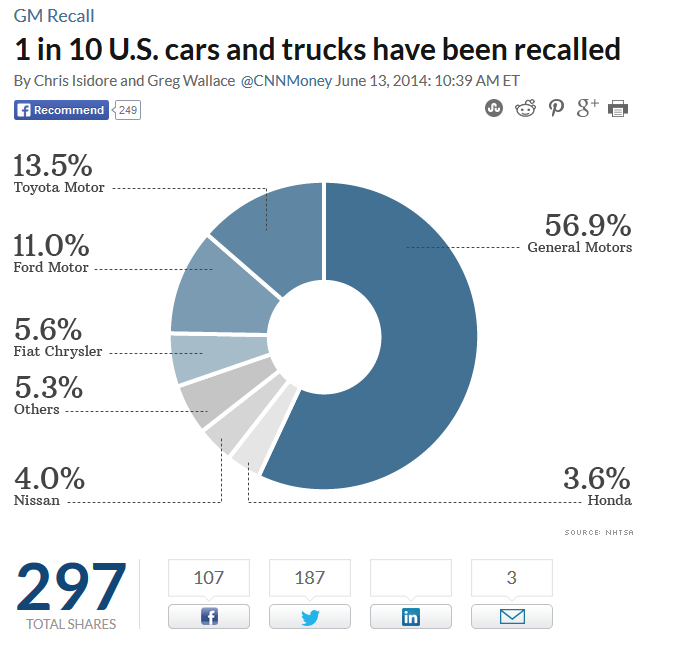 ACCORDING TO… NEW YORK (CNNMoney)

Roughly one out of every 10 of passenger cars and trucks on the road in the U.S. has been recalled this year.

The auto industry has recalled a stunning 25.3 million U.S. vehicles in so far in2014. That leaves it poised to shatter the record 30.8 million vehicles that were recalled in 2004.

General Motors(GM) prompted the surge when it revealed that it took ten years to issue a recall for a flawed ignition switch that’s been tied to at least 13 deaths. In the wake of those revelations, GM has changed its procedures and recalled a total of 14.4 million U.S. vehicles in 2014 — a record for the company. The latest announcement came Friday morning, when GM recalled another 512,000 Camaros. Other automakers have also issued a raft of recalls, scared that they, too, could be accused of overlooking safety problems.

The recalls have been for flaws as serious as a steering problem that prompted GM to tell owners of 477 pickups and SUVs to stop driving their vehicles immediately — GM sentflatbed trucks to haul the vehicles to dealerships for repairs.

They’ve also been for matters as minor as a sticker on the inside of some Kias that incorrectly stated the recommended tire pressure. Kia sent out new labels.

There were 252.7 million passenger vehicles in operation in the U.S. at the start of this year, according to IHS Automotive, meaning the total number of recalls is roughly 10% of the nation’s fleet of cars and trucks.

If there isn’t another recall the rest of this year, 2014 will rank as the third largest number of U.S. recalls in history.

Search for this lesson also.

and this one too.

Check out my definition for Science, Technology, Engineering, Economics, Mathematics