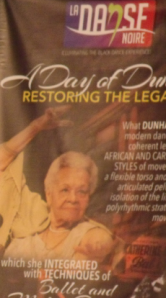 The late Dr. Katherine Dunham (June 22, 1909 to May 21, 2006) is often regarded as the “Mother of Dance” for black people or African Americans. Dr. Katherine Dunham was world famous for her mastery of European Ballet and Modern Dance. Ms. Dunham went on from there to “legitimize” Caribbean ,  African and ethnic South American dance. She was also instrumental in integrating technique from Big Band Era movement, Asian studies in Martial Arts and pop–culture interpretations in every kind of lady’s shoe available.

What typifies Dr. Dunham’s dedication to her art form was the fact that she could demonstrate ethnic dance and defend it (at the time) at any university. Dr. Katherine Dunham was an accomplished sociocultural anthropologist with a doctorate from the University of Chicago.

“A Day of Dunham” was organized by Ms. Carol Lloyd who masterminded a very detailed tribute to Dr. Dunham and her “family-practitioners” of the Katherine Dunham “technique” of international dance. The day long tribute included panel discussions and dance demonstrations emphasizing the 1) historic relevance of Dr. Dunham, 2) her pop-culture and academically accepted dance techniques, and 3) the journeys of experiences of her company’s featured artists as master dancers in the world renowned art form. This extremely rare dance art form engagement by so many certified Dunham Technique Instructors and Scholars for the public was historic. The panels and the demonstration(s) were offered from 9 a.m. to 7:30 p.m.

“A Day of Dunham” also included the Awards Dinner which was a gala celebration with a theme, “Restoring the Legacy” from 9:30 p.m. to 11:30 p.m. This was an event that I will never forget. Today it is often said that we understand what our fore-bearers did for us — struggling to survive chattel slavery, racism, Jim Crow, dismantled businesses getting ready for integration — and we say that, “we stand on the shoulders of those who came before us” but we rarely identify the individual set of shoulders with any depth to indicate what he or she did instrumentally or how well we are doing with the individual or collective legacies that we are empowered to preserve (?). The opening prayers were introduced by introduced by Min. Astrid Maurer Evans and Dr. Robert L. Adams. There was a medley of libation/respect to African ancestors and heartfelt Christian prayer throughout the evening. 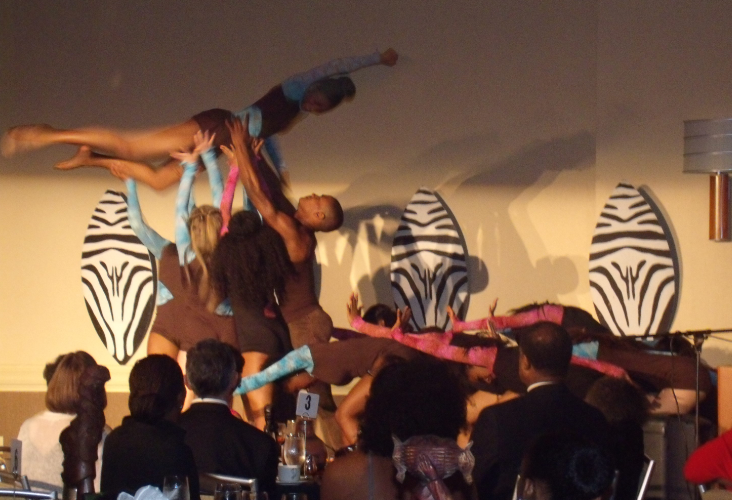 The band the Russell Gunn Jazz Ensemble played classic Miles Davis and thoroughly impressed all in the spirit of great music and dance.

The Soweto Street Beat and the Elevated Places Dance Company performed a “Tribute to Katherine Dunham”.

This awards ceremony and dinner-dance affair was an intimate celebration of the life and contributions of Dr. Katherine Dunham who is often regarded as the “Mother of Dance” for African Americans because of her national and international recognition and her contributions to the art form as a cultural anthropologist.

The “family reunion” aspect of the evening included recognition of the Dunham staff, dancers and associates. There was mention that Katherine Dunham had performed in 50 countries. We can only imagine even today how organized and busy the dancers and company was.

The night was tasteful, sensitive, revering Dr. Dunham and those who had traveled the around the world many times over through dance by young companies and living legends. The commodity of the historic Katherine Dunham Dance Company is what is referred to as the “Dunham Technique”. This technique and dance proficiency embodied signature movements of the Dame (Diva of Dance) and her (on the one side) uncompromising technical integrity of the European classical and modern dance forms which she blended into fluid appreciation and adaptations of Caribbean, African, Martial Arts, Big Band Era Pop-Culture Trends, Hollywood Stylized Movement Genres and “world-dance” gestures and interpretations also. Dr. Katherine Dunham essentially verified that black folks could contribute to ballet and demonstrate world dance never seen before with the passion and dignity it deserved.

The DJ who allowed us to “party” after the Awards Dinner was from Third World Production.

Yale University  comments about, Who was Katherine Dunham?

“As a strident activist for racial equality throughout her lifetime, Dunham used the mediums, of teaching, choreography and community-based arts centers as a vehicle to instill an ethos of toleration and critical engagement with the world in both children and adults. This is a work that she continues to this day, even at the age of 95. Dunham saw a historical analog between the ways that religion and the cultural form of the dance was critical to the liberation of the Haitian people and how they were instrumental to the survival of United States blacks in the pre and post-Emancipation eras. Therefore, her interest in the relation between cultural forms and social functionality was not merely intellectual, but political and personal as well. Nurtured under the guidance of Chicago’s social anthropology luminaries, Dunham’s interrogation of the relation between form and function in dance rituals has interesting parallels with the symbolic approaches of Victor Turner and Clifford Geertz.”

MAKE IT HAPPEN! We welcome YOUR inquiries about advertising and our professional services in project development, advertising, school improvement, program development and implementation, instructional design, publishing and public relations. PLEASE JOIN/FOLLOW US BY CLICKING SECTION ABOVE. THANKS.

Groovetrak Provides Targeted East Coast, And Some National and Global News that You Can Consider, Use…And Then Network!