The most conflicting testimony offered that sound nothing like the first “eye witness” accounts is Witness # 10’s account… Here is some of that segment. 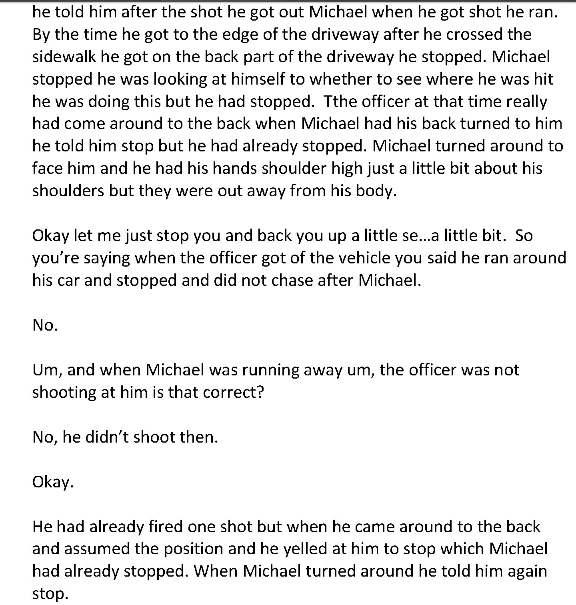 “I saw the barrel of the gun pointed at my friend,” said Dorian Johnson, 22. “Then I saw the fire come out of the barrel.”

Johnson, in an exclusive interview with msnbc, said what began as an order by a police officer to ‘get the f— onto the sidewalk’ quickly escalated into a physical altercation and then, gunfire.

“I could see so vividly what was going on because I was so close,” said Johnson, who said he was within arm’s reach of both Brown and the officer when the first of several shots was fired at the teen. Johnson says he feared for his life as he watched the officer squeezing off shot after shot.

This whole transcript is worth reading and just as important and exercise as marching and going through this tragedy emotionally.

Courtesy of ABC News and TYTNetwork and CNN

MAKE IT HAPPEN! We welcome YOUR inquiries about advertising and our professional services in project development, advertising, school improvement, program development and implementation, instructional design, publishing and public relations. PLEASE JOIN/FOLLOW US BY CLICKING SECTION ABOVE. THANKS.

Groovetrak Provides Targeted East Coast, And Some National and Global News that You Can Consider, Use…And Then Network!