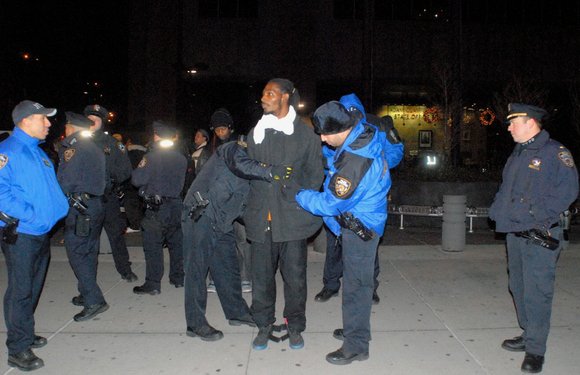 This decision outraged many within the inner-city, whose concerns of coming in contact with cops is already heightened. They contend that the two city officials are primarily doing this to continue criminalizing a generation of Black and Hispanic males, support the prison-industrial complex and mask police brutality and police terrorism.

“There’s a widespread pattern in American policing where resisting arrest charges are used to sort of cover—and that phrase is used—the officer’s use of force,” explained law enforcement expert and retired University of Nebraska-Omaha criminal justice professor Sam Walker. “Why did the officer use force? Well, the person was resisting arrest.”

It is common knowledge in urban environments that police routinely slap the ambiguous “resisting arrest” charge on anyone and everyone to shield their racial profiling. Some reporters have documented this at an array of protests they have covered.

In November 2014 Commissioner vowed to crack down on ‘brutal, corrupt, racist’ officers…also

In a blunt message at the time reported by the NY Amsterdam News he said, “the first of its kind by the city’s top cop, Commissioner of the New York City Police Department William Bratton made it clear that officers who abused their authority are “poisoning the well” and will be aggressively removed from his department. Bratton announced his plan last Thursday, when he addressed some 800 NYPD commanders about the future of the Police Department at the new Police Academy in College Point, Queens.

“We will aggressively seek to get those out of the department who should not be here,” said Bratton. “The brutal, the corrupt, the racist, the incompetent. The reality is, at this moment, that there are some in the organization who shouldn’t be here.”

He added, “They’re not the right fit for the NYPD of 2014. There are a few, a very few, in a very large organization, who just don’t get it. They don’t understand that when they take that oath of office and put that shield on, that they commit to constitutional policing, respectful policing, compassionate policing.”